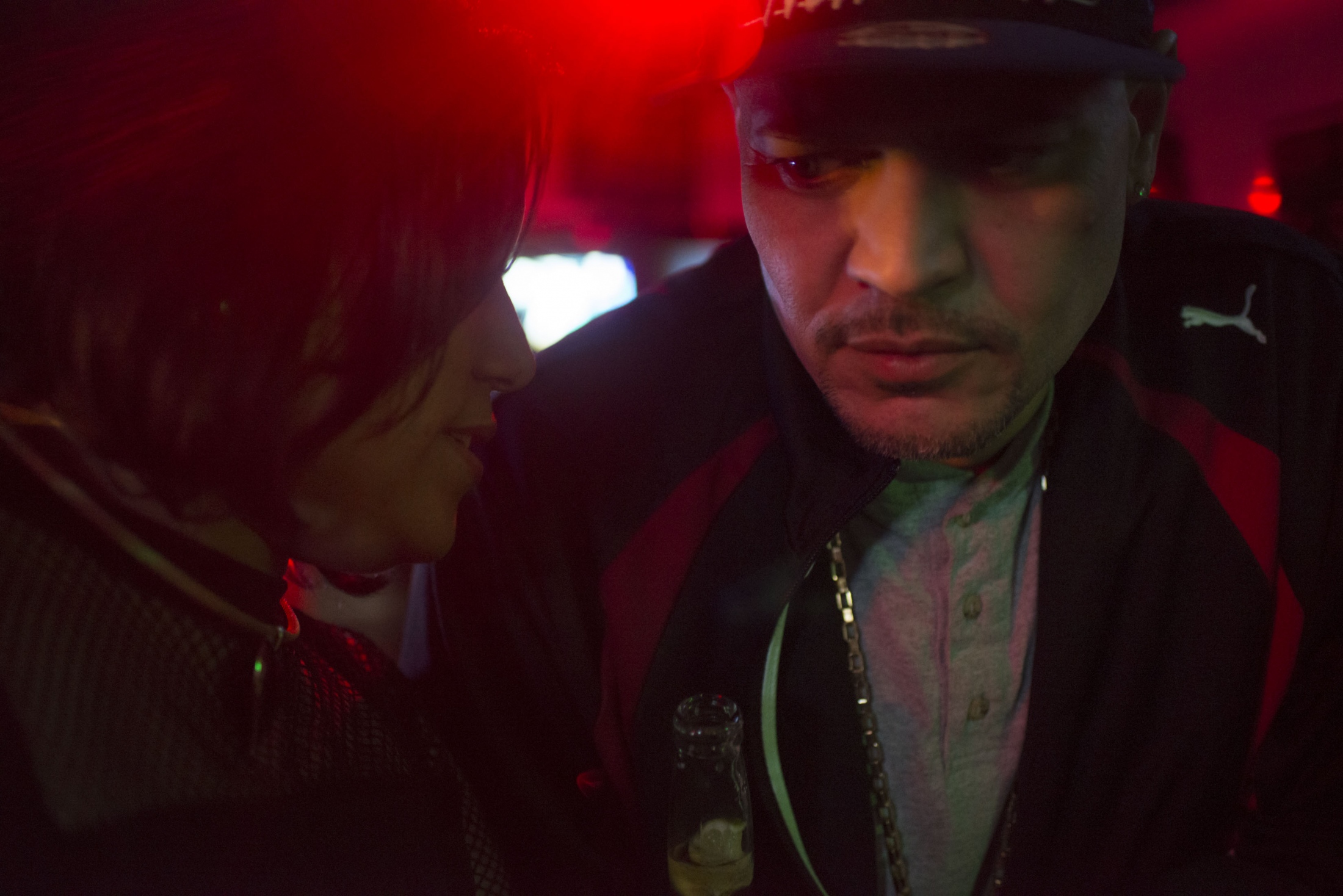 1 / 13
While out on bail, Green Eyes does not remain loyal to his partner, India. The pressures of his upcoming seven-year sentence send Green Eyes to the bars and clubs each weekend, staying up all night until the early morning, instead of spending time at home with his family. Green Eyes’ behavior heightens the pressure on Bolden: “I [Green Eyes] started messing around and talking to other women behind my wife’s back and got caught in the club kissing another woman. Now, I felt really fucked up. At that moment I felt like I lost my whole family. It felt like the world ended. I was thinking about not turning myself in for sentencing and just go on the run until they catch me or I die…”
Luis Charlesman, known among friends and family for his brilliant green eyes, grew up in Puerto Rico, stealing cars and selling them to the chop shop for fast cash, eventually dropping out of school at fourteen. He was in prison for two years before he turned eighteen. “Green Eyes” moved to Brooklyn in the late 1980s and began selling drugs to support his mother and brother also living in New York City. He spent about twenty years in the city, selling drugs, doing legal jobs, battling his own drug addiction and moving in and out of jail and prison.

In 2008, Green Eyes and his then wife, India, moved to Syracuse, where they opened a small car repair shop on the Southside. Green Eyes relapsed shortly after he was cut off from his methadone treatment program. Soon after, the auto shop shut down. India was able to get a job at SUNY Upstate Medical Hospital. Green Eyes’ most recent arrest was in September 2014 as part of “Operation Horseback,” which led to the arrest of 34 people in a heroin ring that stretched from NYC to Puerto Rico.

Deemed a kingpin, the judge set Green Eyes’ bail at $250,000 and offered him a sentence of 25-to-life, to which he responded, “Who’d I kill?” A private lawyer got his bail lowered to $10,000, and a seven-year sentence in exchange for a guilty plea.

At Cayuga Correctional Facility, the 47-year-old is known as “Viejo,” the old man. By the time he gets out he will have gone to prison five times, totaling between thirteen and nineteen years of his life. This essay follows Green Eyes and his family at home and on the streets of the Near Westside and Southside neighborhoods of Syracuse, during his last months out, as he as he prepares to leave his family for yet more time behind bars. 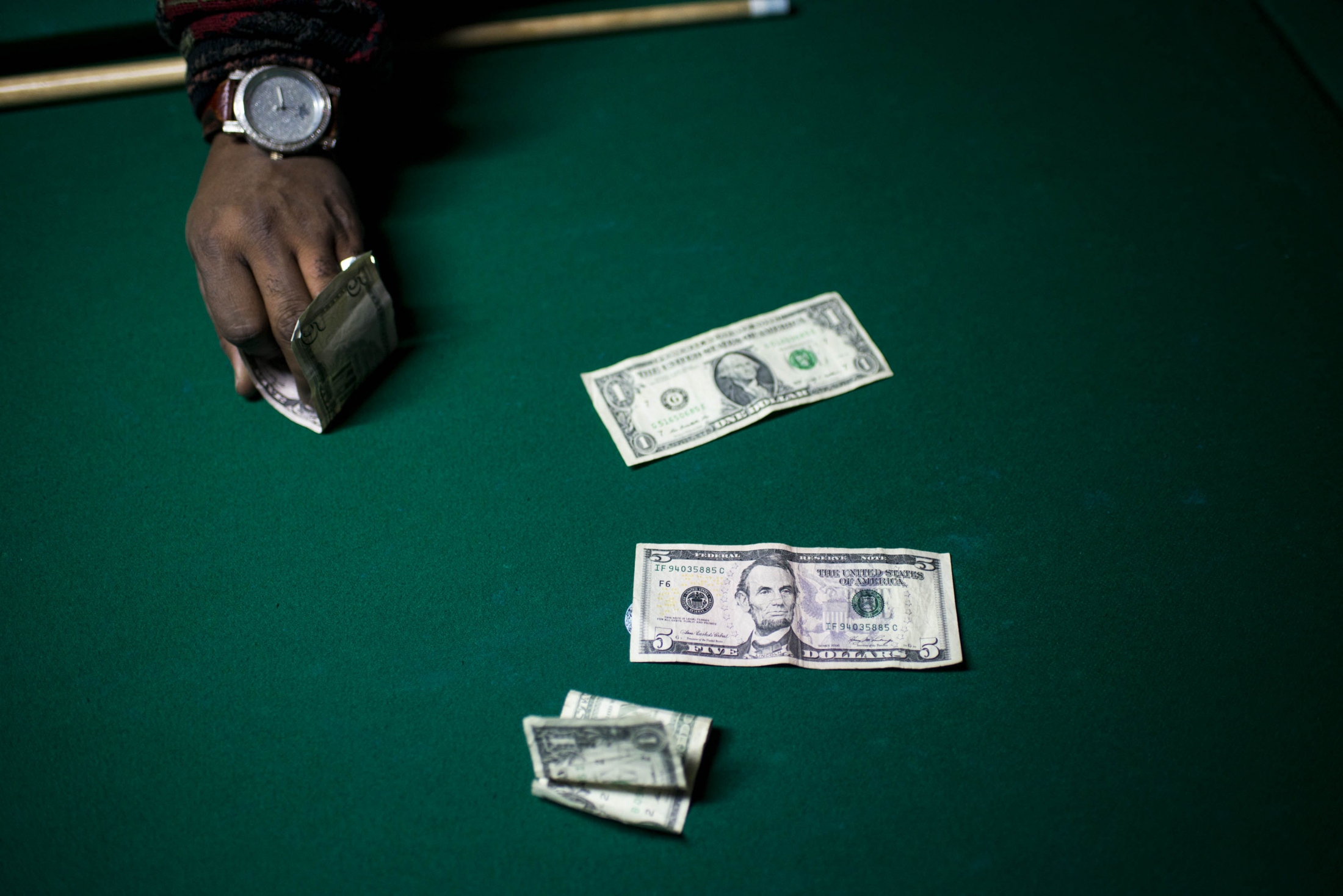 3 / 13
Patrons begin to filter into Calcaño’s Tavern on the corner of Richmond and Geddes around midnight on a Friday. The DJ plays Bachata, Merengue, and Salsa music while people shoot pool and dance. Green Eyes warns avoiding the recesses of Richmond Ave where cars are more likely to be broken into; once the street near the bar fills drivers park on the sidewalk. 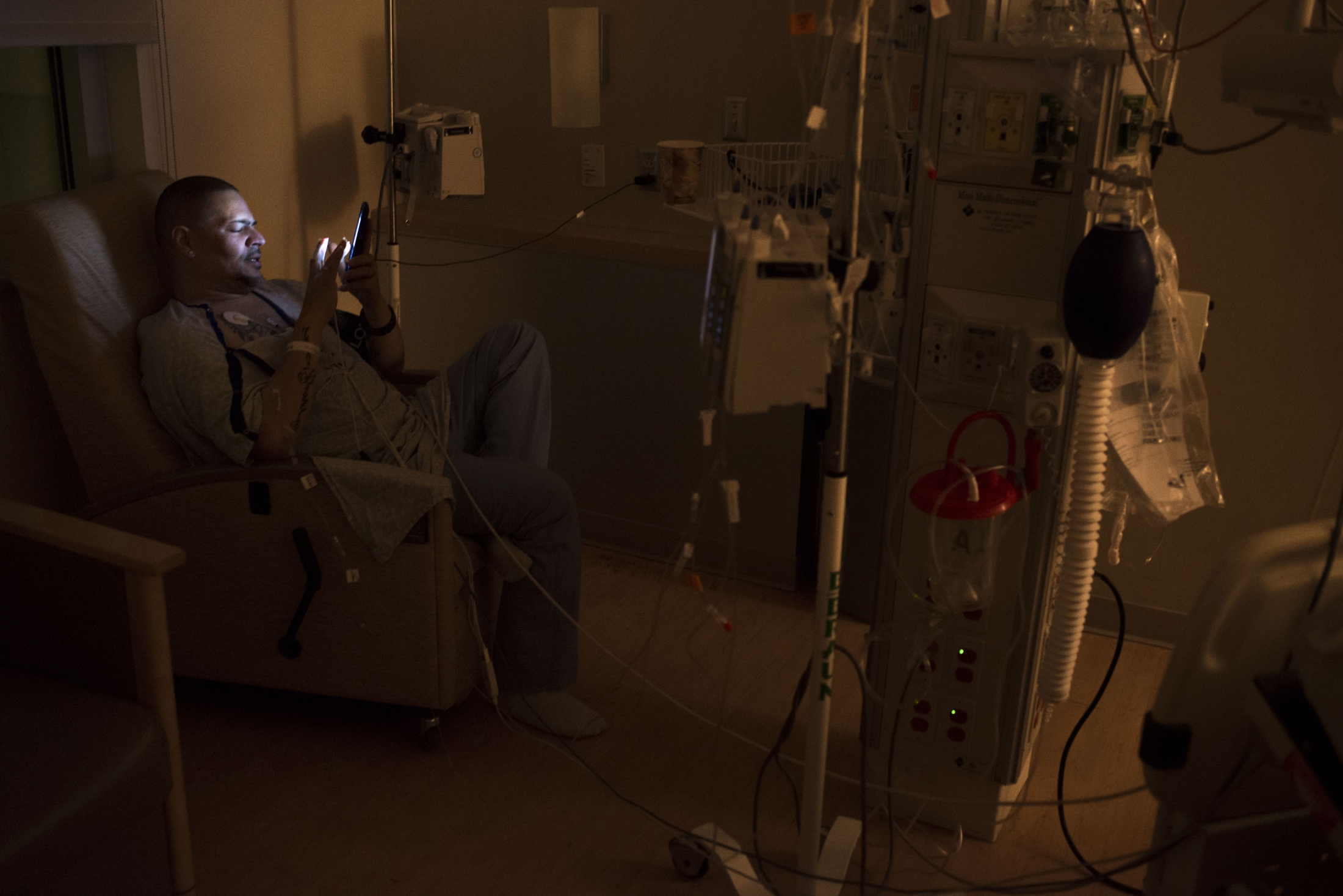 4 / 13
Having difficulty breathing, Green Eyes checks himself in at Upstate Hospital. Diabetes and high blood pressure is complicated by a history of heroin use—on average he shot up a gram of heroin per day. In September 2014, Green Eyes went into a weeklong coma from withdrawals after his arrest. Concerned about his declining health, Green Eyes expects to die in prison. 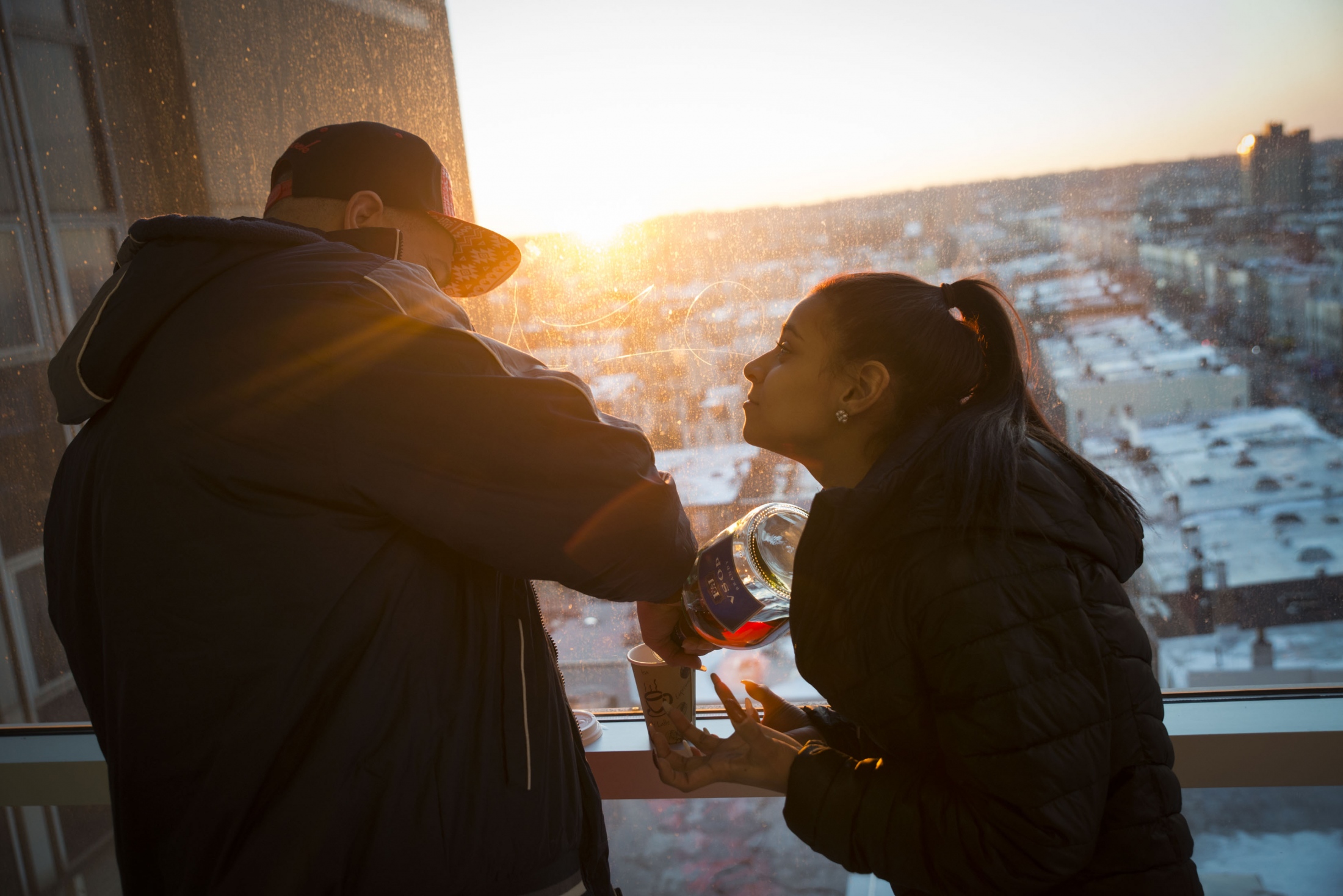 5 / 13
Expected to hold it together, Green Eye drinks all day and night to suppress his anxiety and pain at the sight of his families suffering from seeing their grandmother awaiting her death. His niece, Nikita, tries to get him to stop drinking after staying up all night at the hospital. 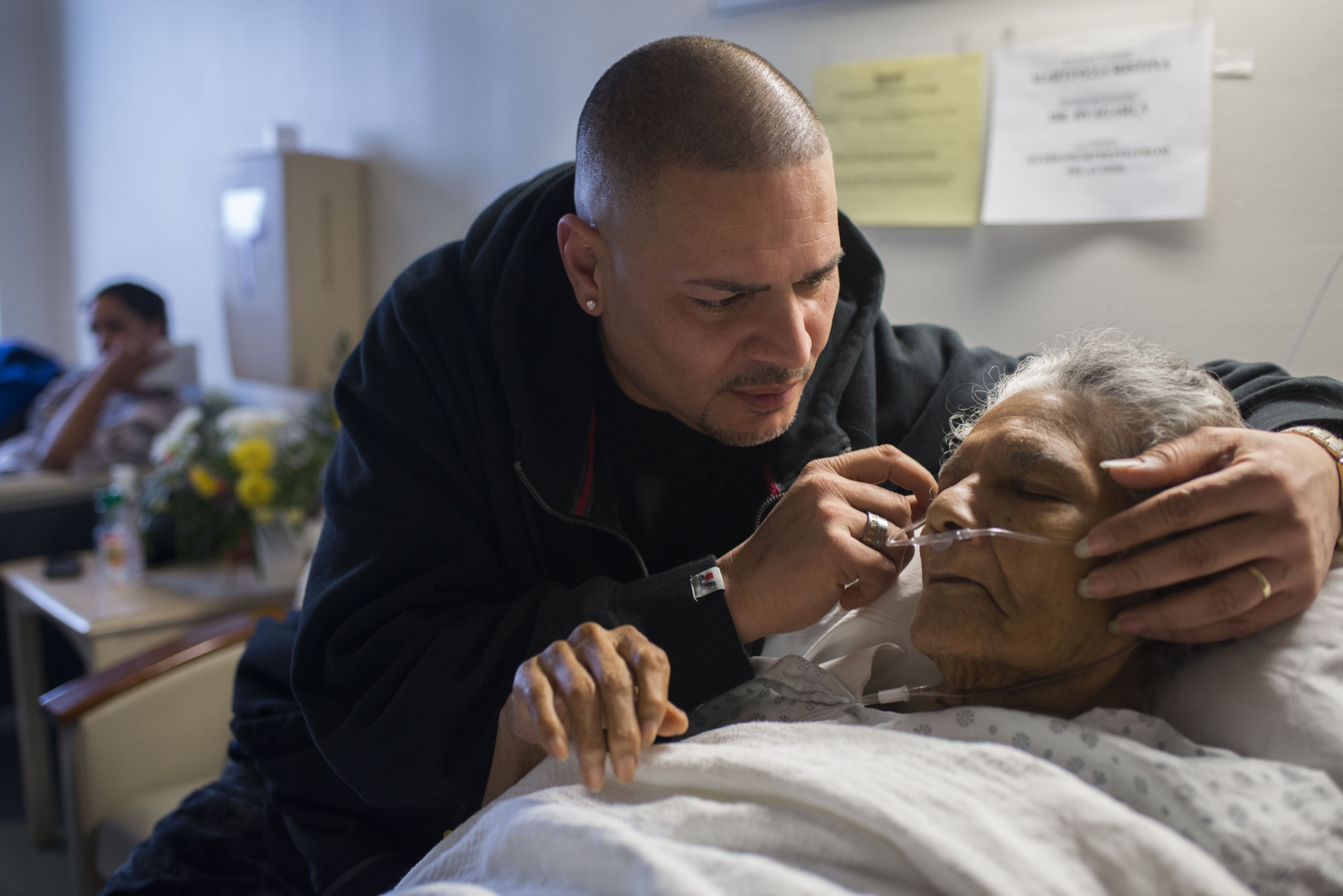 6 / 13
Green Eyes comforts his dying grandmother in hospice care, having been granted a month long sentencing delay to pay his respects and say goodbye. He travels to Brooklyn three times—twice to visit her at Wyckoff hospital and once more for her funeral. 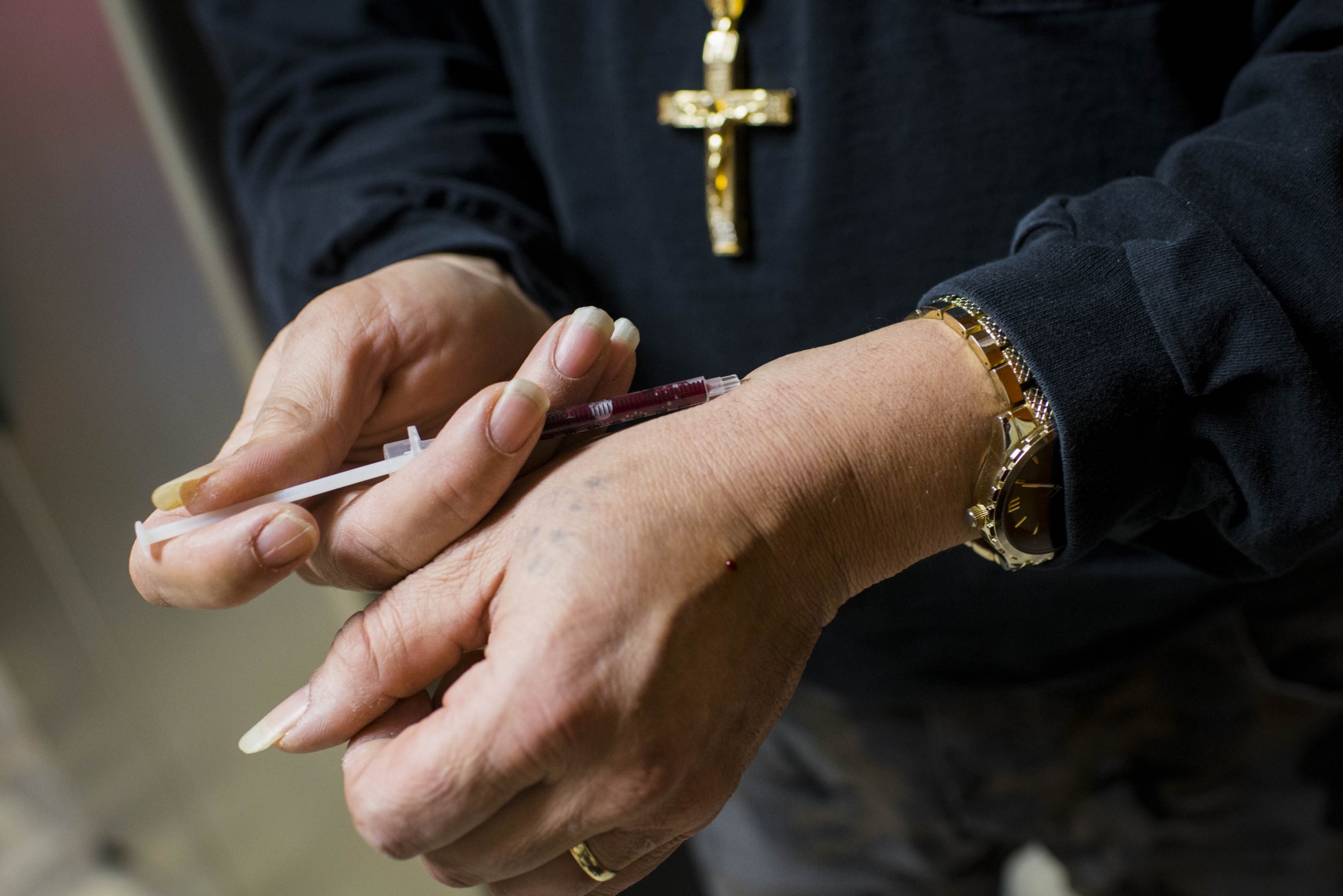 7 / 13
Green Eyes employs an alternative method to relieve extreme headaches caused by high blood pressure. He draws two syringes worth of blood from his arm, bringing down the pressure and relieving the pain. 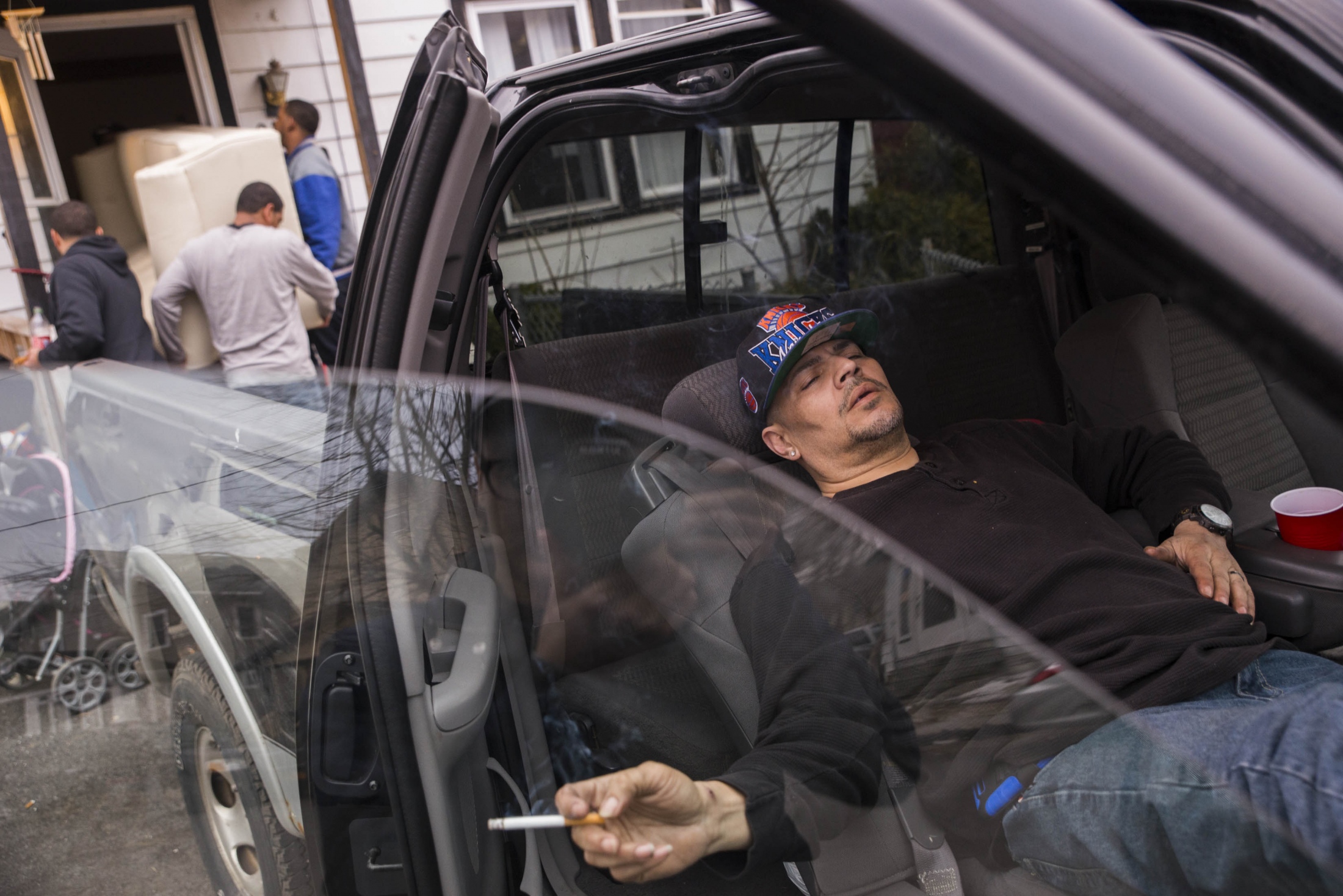 8 / 13
Green Eyes nods off after relapsing on heroin while his friends move Bebo and his family from their recently condemned apartment. Arrested with Green Eyes, Bebo will spend 1-3 years in prison while his children wait for him to come home. 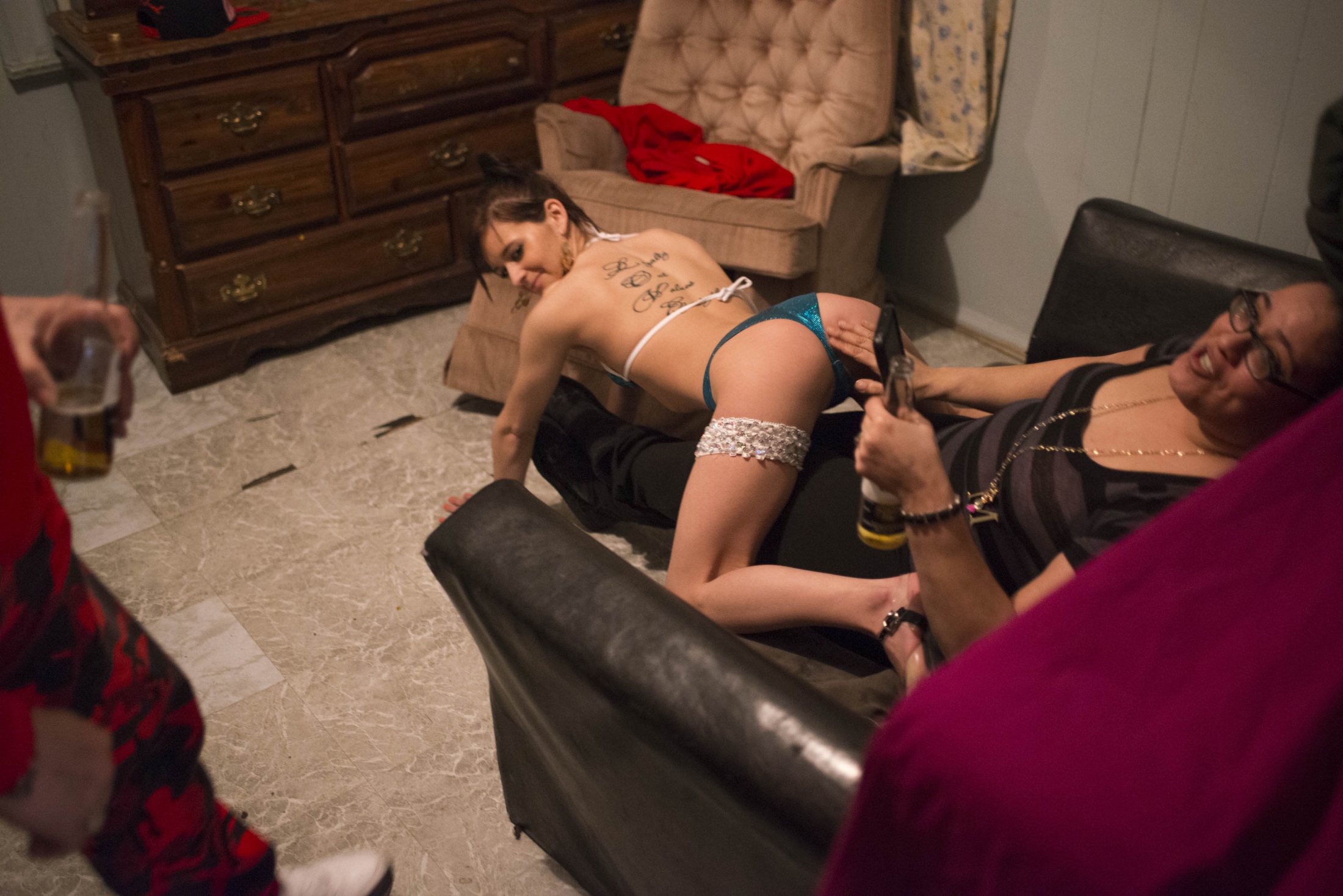 9 / 13
Green Eyes sister Mimi throws him a party on what is suppose to be his last night free. 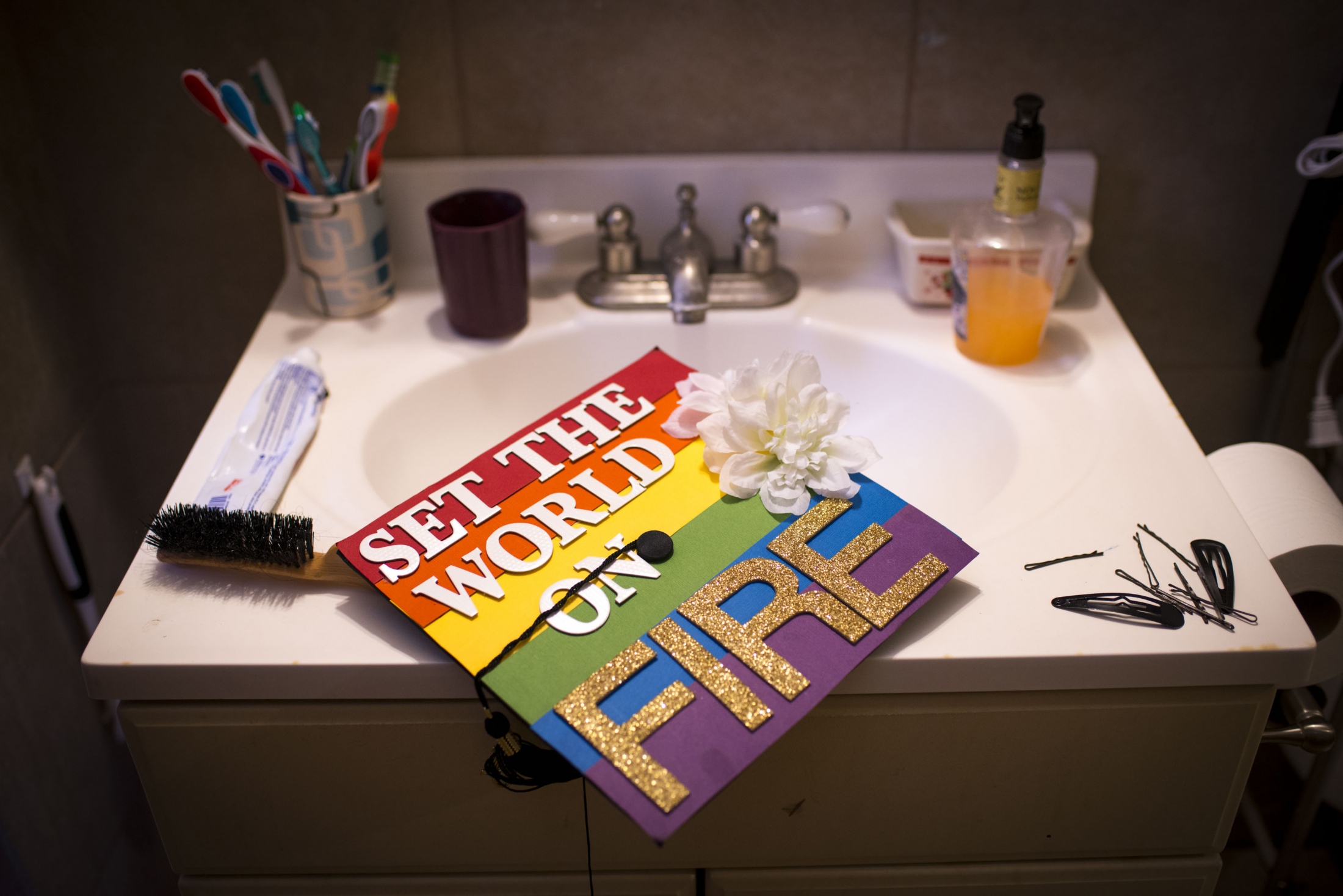 10 / 13
India celebrates at her graduation party after receiving her B.A. in Sociology from LeMoyne College. Inspired by her life experiences, she focused her senior project on how the prison industrial complex affects the family makeup of minority families and contributes to a breakdown of trust between minority women and men dealing with marriage and parenthood: “Prison has always been a topic of conversation, unfortunately. A lot of people in my family have been to prison or are in and out of jail frequently and in my communities prison was just such a normal thing to talk about or experience. When I got old enough to realize that there was nothing normal about it I was interested in finding out what normalized it in minority communities and why my white peers weren’t experiencing this in the same way.” 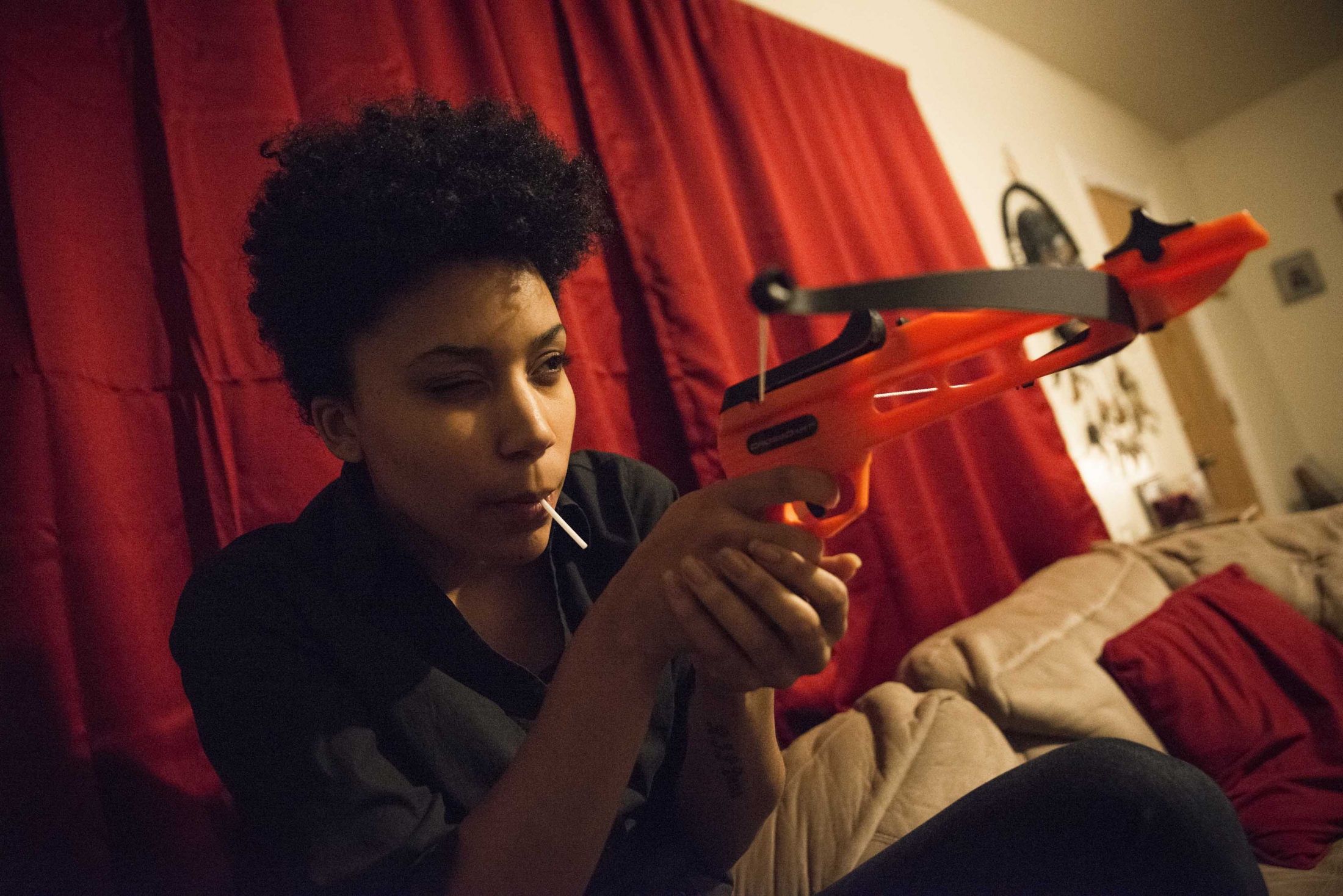 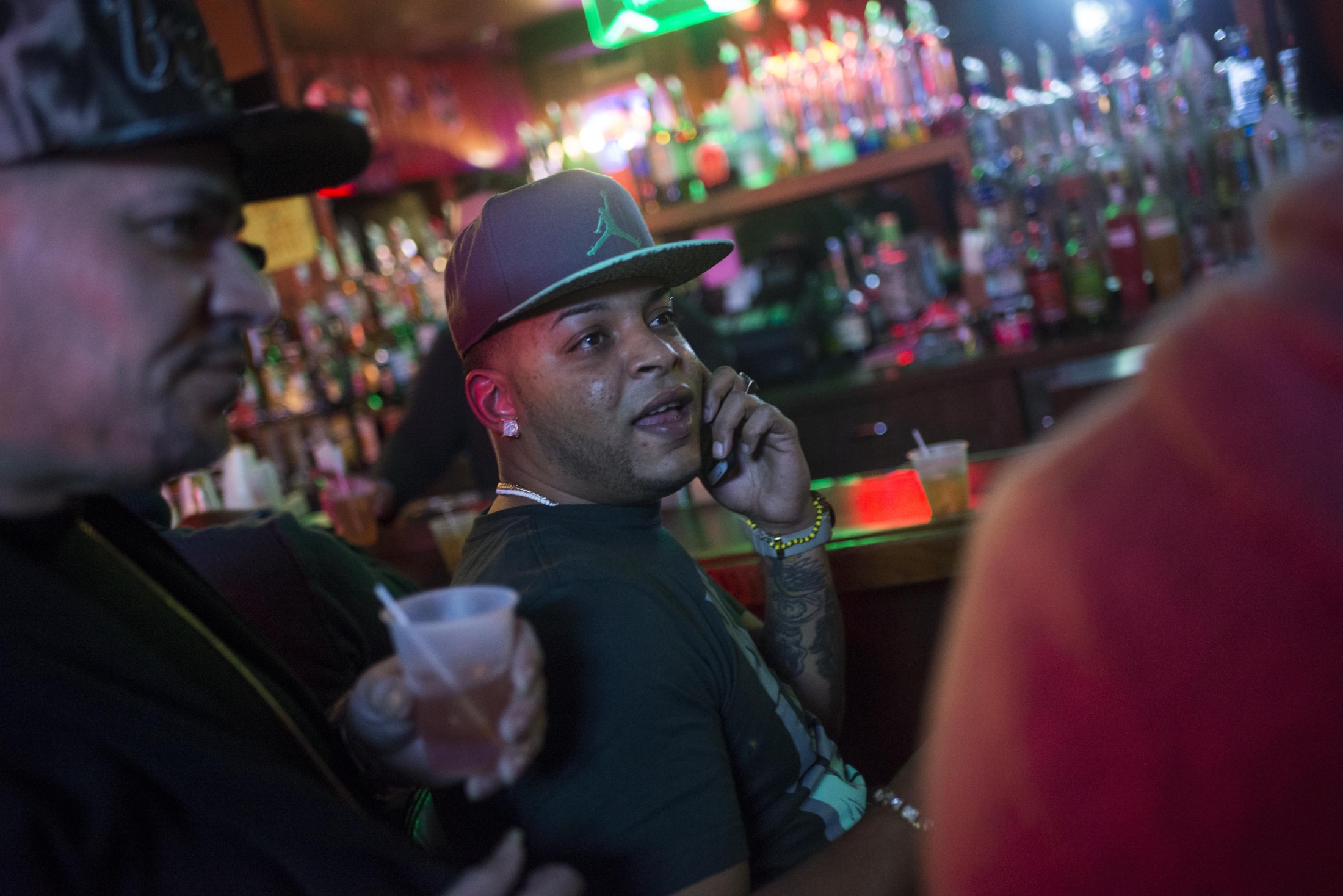 12 / 13
Green Eyes and Bebo spend Fridays playing pool at Calcano’s Tavern before his sentencing. On a busy night, cars pull up on the sidewalk to park, avoiding the recesses of the side streets where auto burglaries are likely. 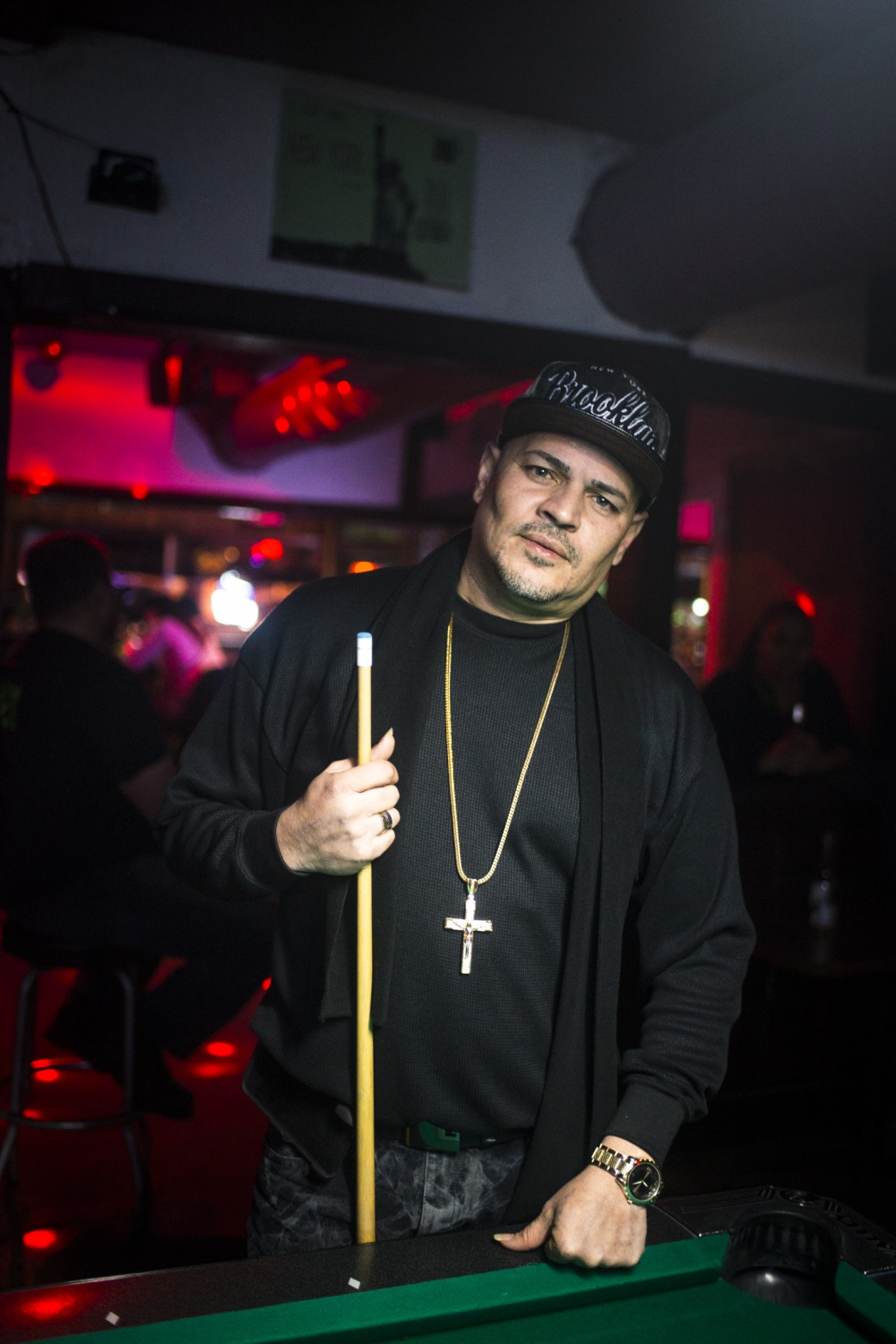 Luis Charlesman, known among friends and family for his brilliant green eyes, grew up in Puerto Rico, stealing cars and selling them to the chop shop for fast cash, eventually dropping out of school at fourteen. He was in prison for two years before he turn...